How to Hire the Best Offshore Golang Development Team: In-Depth Guide for 2022

The software market is growing at a blistering pace while simultaneously changing and challenging the business world. More and more business workflows and processes are automated and/or handled by custom software solutions.

Taking into account the rising need for powerful and custom software solutions, you may have a project in mind that involves hiring Go developers. Recently, we’ve got a new client that has been looking for Golang developers and into building an offshore development team. Being experienced due to previous clients, the project with this new client was a success.

While building a professional team for our client, we found out a lot about Golang developers, talent pools in Ukraine and the US, etc. In this blog post, we’ve collected the best tips, ideas, and valuable insights about hiring Golang developers.

Go is an open-source language, or as one may say, Go is Google’s alternative to C. It’s a mix of Python speed and C++ security. Go has the same performance as C, it’s easier to maintain than Java, and it doesn’t need a virtual machine or JAR.

Golang is really a flexible language and can be used for a wide range of apps and software solutions. There are no particular requirements that suggest what companies can use Golang. Golang is used for various Google internal and external projects, including Google Chrome, YouTube, and the Google App Engine.

Google isn’t the only company that uses Golang. Uber, PayPal, Sixt, SoundCloud, Twitter, Alibaba, SendGrid, and Dropbox used Golang to scale their systems and improve their app performance. More and more companies are choosing Golang for their development needs thanks to its simplicity and security.

Are you ready to power up your team with Golang developers? Check out the benefits of IT Staff Augmentation with Newxel.

There’s no need for many lines of code when developing apps with Golang. It means that developers can save some time on more important things than just reading the code.

Simple apps can be created with any existing language, but only a few can be used for complex and large software systems. Golang is one of them.

It doesn’t usually take too long for a software engineer to learn the basics of Golang, thanks to its simplicity. To add to this, there are tons of free tutorials, as well as documentation that can be found all over the Internet.

If there is a problem, Golang has a few solutions (and preferably only one). Unlike other programming languages that have more solutions than developers, Golang shares a “one problem-one solution” philosophy.

Thanks to its unique nature, lots of code maintenance issues can be automated, including code importing and formatting, refactoring, searching for definitions, etc.

Most programming languages nowadays were created long before the Internet revolution, except for Golang. It features unmatched network support and allows for creating state-of-the-art web solutions without the integration of third-party services.

Golang is an open-source language that utilizes a large community of developers, and everyone can get information about new solutions, as well as get support through free tutorials, learning materials, and forums.

What Does Being a Professional Golang Developer Mean?

Let’s assume that you have already decided you specifically need Goland developers. Before hiring Go developers, you have to find out who they are and how to choose the best ones for your company. Check our list of desired technical skills before getting off and searching for Golang developers.

The full list of desired libraries, tools, and frameworks depends on your specific needs. For example, while developing a web app, your Golang developers should have some experience with the Revel or Gorilla frameworks.

When we’re speaking about Golang developers, they need to have a good understanding of database-related tech, including SQL/ NoSQL, Azure, and/or AWS.

Code maintenance in Git isn’t any less essential than writing clean code. Git eases the onboarding process for new developers. It’s of great importance for companies that are going to grow big and hire extra Golang developers in the near future.

That’s only some of the technical sides required from Go developers. Since developers work in a team, they also need to be nice. Here’s a shortlist, of soft skills to check while hiring a Go developer.

Looking for battle-tested Golang developers ideally suited for your business project? We can find them and set up a whole offshore Golang development team or even open an R&D center. Just contact us for more details.

Challenges of Hiring a Golang Developer for Your Project

The number of software developers is constantly growing. According to Statista, the projected number of IT engineers will reach 28.7 million in 2024. But will it be enough to satisfy an ever-rising demand? 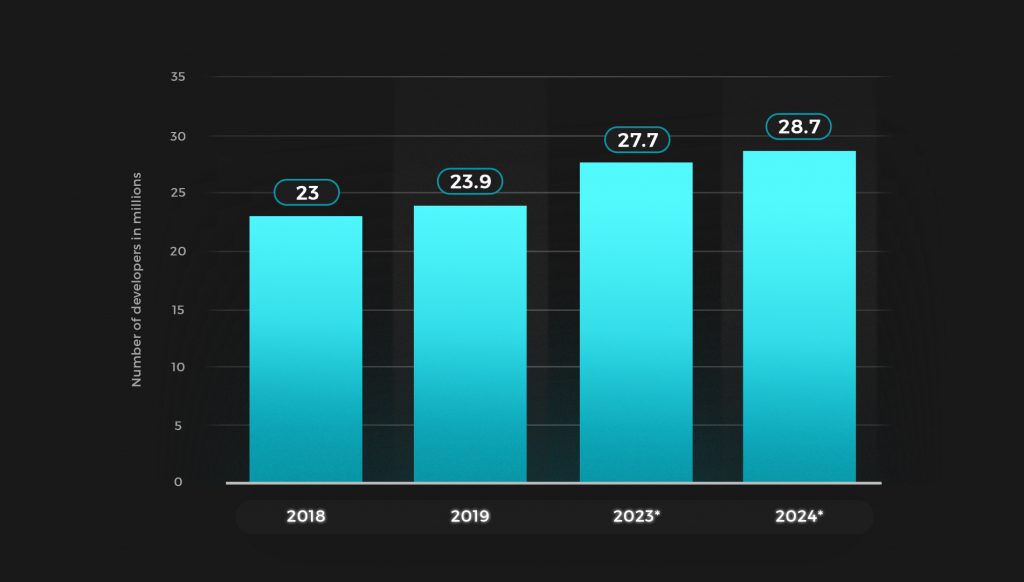 Taking into account the fact that Go is a relatively young programming language, there is a limited pool of Golang software developers worldwide. When it comes to hiring senior Golang developers, the HR battle becomes even more fierce. If you’re planning to innovate your software product with the power of Go, hiring a Golang developer may be a real challenge, but not for Newxel however.

Another crucial factor to consider while hiring Go developers is the recruitment cost. According to recent research by the National Association of Colleges and Employers, the costs required to hire a company of up to 400 people can be more than $7,645 per single hire. But when it comes to hiring rare specialists, the costs will be doubled if not tripled.

Job seekers are looking for more than just a competitive salary and they can always get a better offer due to tight competition in the IT market. According to the 2018 Recruiter Nation Survey, 75% of recruiters received refusals from candidates due to better offers. It means that recruiters spend lots of time and resources negotiating with employees-to-be, all for nothing.

Worried about all these challenges, how to overcome them and hire Golang developers? Take advantage of Newxel’s hiring powers. We can hire a developer for a startup or set up a development team perfectly suited for your business needs because we know everything about the IT sector and how to hire senior Golang developers for your project.

How Much Does It Cost to Hire Go Developers Offshore?

There are numerous factors that go into pricing a service project, and this is why estimating an accurate cost can be difficult.

To give you an idea of the range, the average hourly wage for an offshore Golang development team from Ukraine is between $25 and $35 per developer. However, developer rates in other markets outside Eastern Europe such as the United Kingdom, the United States, Germany, Canada, and the Netherlands, on the other hand, may range from $61-$81 per hour.

Golang Developers: Ukraine vs. the US

Though the US market may offer a larger pool of candidates than Ukraine, it does not offer better cost-efficiency. As it’s vital for a software project to be both cost-efficient and high-quality, there are also other benefits to hiring a Golang developer in Ukraine, including:

DOU (a Ukrainian news platform for IT experts) says that most Ukrainian software developers can communicate with clients using English. This means that all communication will be smooth and clear.

A convenient location in Eastern Europe and a time zone of UTC +2 (+3) make it easy to communicate and handle business meetings both offline and online.

Recently, we faced a real challenge to find and hire more developers for a cloud data warehousing platform. A company failed to hire local software engineers in Israel, and so they came to Newxel to hire developers that fully meet their specific requirements.

Since the startup was scaling really fast, we had to hire fast and hire quite a lot of developers for the project. We proposed to consider software development in Eastern Europe and set up an offshore development team in Ukraine for a number of reasons, including a large pool of skilled developers and lower costs when compared to Israel.

Why Should You Choose Offshore Golang Development With Newxel?

We’ve been helping businesses strengthen their teams with Golang developers since 2016. Before starting the recruitment process, we’ll carefully study your needs and requirements to find developers that perfectly fit into your existing business workflows.

While you stay focused on your business Newxel will do anything and everything else for you. Contact us to find the best Golang developers for your project.

Gone are the days when your options were only limited to hiring local and in-house developers. These days, hiring Golang developers offshore is a more viable alternative. However, it’s best to carefully define your job requirements before you get started so that you can match your budget and requirements with the best team for the job.