Home › Blog › Articles › How Much Does a Python Programmer Make Worldwide? An In-depth Comparison

How Much Does a Python Programmer Make Worldwide? An In-depth Comparison

From its origin in 1991 to date, Python has consistently grown to become a favorite coding language for firms and developers worldwide. Python comfortably sits at the top of the programming language popularity charts by PYPL with a staggering 29.48 % market share. 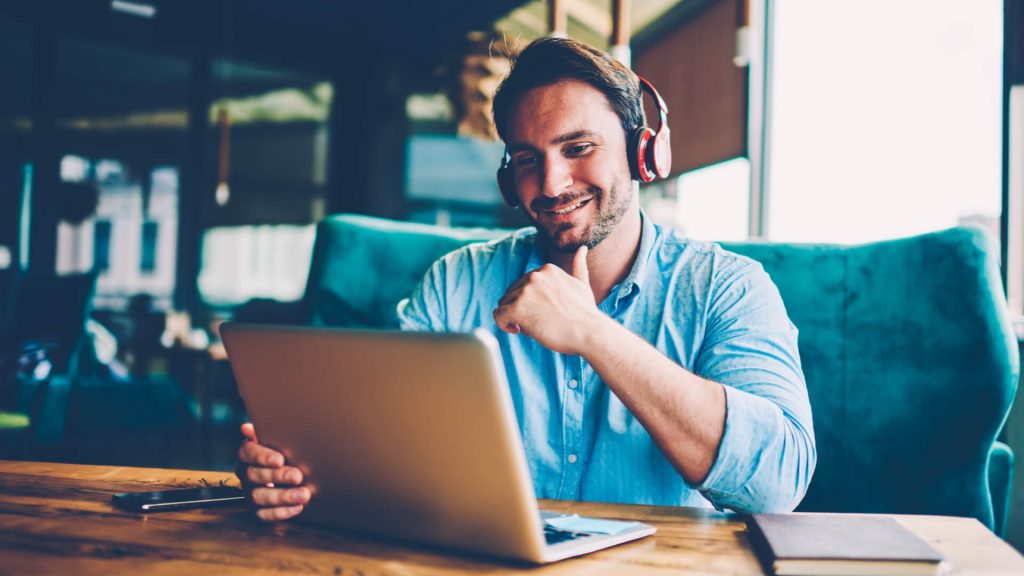 With such a huge demand for Python talent, the salaries for Python developers, particularly in the U.S are now higher than ever. To fill positions without breaking the bank, most companies are turning to outsourcing and outstaffing. But the big question is, how much are they really saving? How much does a Python programmer make in the U.S vs. other countries around the world?

In this article, we will uncover the elements influencing a Python coder’s salary in different countries and reveal why Python programming jobs are more than the available candidates. Read on!

Factors affecting Python salaries include expertise, range of abilities, the firm’s size, and more. Here are some determinants of how much Python programmers make in detail.

The level of expertise in the core skills can significantly decrease or increase a developer’s salary. In Python, the most important are: relevant frameworks, experience with AI and Machine Learning, familiarity with ORM and Python libraries, version control, and a good grasp of front-end technologies (HTML5, CSS3, JavaScript multi-process architecture).

Python software technicians should have good interpersonal relations with clients and colleagues. When Pythonists can relate favorably with people, they can handle projects effectively, hence boosting their rewards.

A knack for solving problems

Python developers need to have an acute attitude. These programmers should be able to break significant challenges into tiny chunks, examine them, and ultimately find solutions for them.

They must understand related coding languages, including Java/C++, framework organization, capacity to operate in Machine Learning and Artificial Intelligence fields, and more.

Top companies like Apple, Google, or Amazon will most possibly pay higher wages to their employees than smaller companies. This would explain why more developers would instead work with them.

The cost of living and the number of available Python developers in a country, state, or city also plays a big part in determining how much companies are willing to pay the developers. The lower the number of developers available locally, the higher the salaries.

The average cost of living index in the United States is 70.95, thus it is to be expected that the US salaries would be higher than countries with a lower cost of living. In addition, the talent shortage increases demand and thus compensation as companies fight to attract the best talent.

How to compare salaries effectively?

With all the above factors taken into consideration, the best way to get a clear picture of Python programming jobs salary is to group the developers according to three levels, junior, middle, and senior.

For the comparison to be more objective, we use the same data source for all mentioned countries. This ensures that the position and salary ranges are defined the same, and there are no discrepancies in the data collection methods used.

Python developers’ salaries in the US

According to Glassdoor, the average salary of a Python programmer in the US is $96,890/year while the entry-level Python developer salary is $68,000 annually. The highest earners walk away with about $140,000 per year.

Here are the developer salaries by level:

The popularity of data analysis (DA), machine learning (ML), and artificial intelligence-based (AI) digital technologies in Europe is raising the demand for Python programmers on the continent. Fortunately, most European countries, particularly Eastern Europe now boast more talent than they need and actually export their services to countries that have shortages or prefer lower development costs.

Due to the lower living expenses in most European nations, most of the developers often charge much less compared to the U.S. To put this into perspective, here are Python programming salary figures of a few European countries:

Looking at these figures, the entry-level Python developer salary in the US is more than the German average by about $2,500. In addition, the highest earners in Germany get significantly less than middle developers in the United States. However, note that Germany, although in Europe is also affected by a skills shortage, which explains the higher salaries than some countries in this comparison. In addition to that, the cost of living index in Germany is 66.57.

The mean annual wage in Switzerland is approximately $107,728. The breakdown by level is as follows:

With a skills shortage on the rise and a global living expenses ranking of 122.67, Switzerland has some of the highest wages in software development. Moreover, compared to the US, the salaries are higher in Switzerland.

When it comes to the cost of living index, the Netherlands has a 75.22 rating which is higher than the US. However, the skills shortage here is not as pronounced as in the US, and the developers earn less.

Ukraine has by far the lowest salaries on this list. This could be attributed to a low cost of living index of 30.94 and a large talent pool compared to the country’s needs. The average annual salary for a Python developer in Ukraine is $41,830.

The highest-paid developers in Ukraine earn over two times less than the average in the USA.

The annual average base salary for a Python engineer in Israel is about $76,401.72. According to level, the salaries are as follows:

Israel has a 79.54 cost of living index, which is higher than the US. While their national salary average is lower than in the United States, senior developers earn more in Israel.

There are roughly 2,600 Python programming jobs available in Australia, scattered over a broad range of businesses. According to Glassdoor, the mean total compensation a Pythonist in Australia receives per annum is $82,591.

The highest earners in Australia get about $126,445 per year. Australia has a cost of living index of 73.39 and a marked software developer skills shortage as well. Again, the salaries in Australia are less than those paid in the United States.

According to Statista, Python use among developers is at 48.2 percent, making it the third most widely used development language. This is a good reflection of how many developers prefer Python over other languages and explains why Python is more popular than ever. 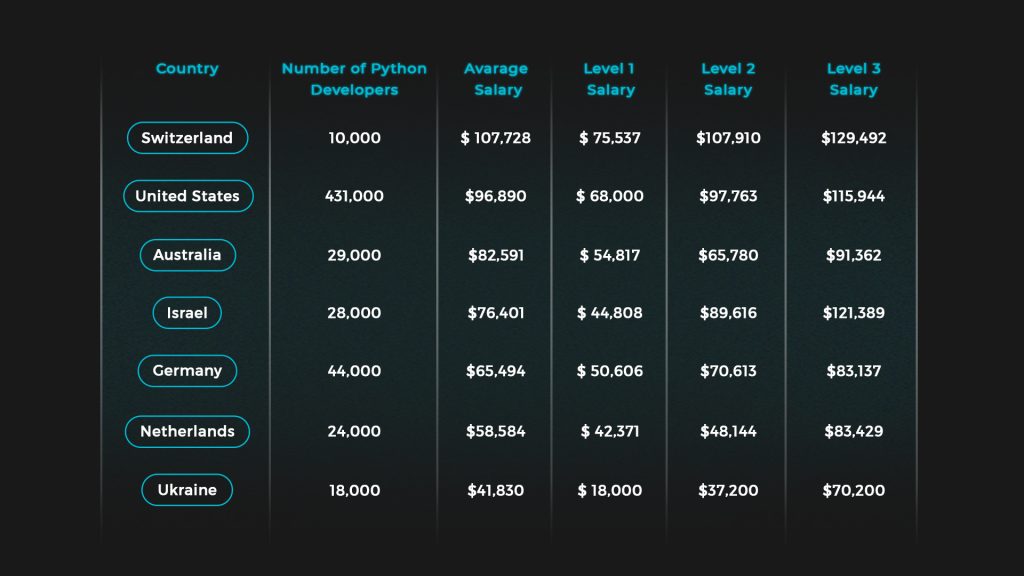 According to a Linkedin analysis, the United States has the most Python coders, about 431,000 of them. However, senior officials of large enterprises and start-ups find hiring in the US cumbersome as these numbers do not fulfill the large demand. Therefore, they are turning to outstaffing to destinations like Ukraine, where there are more developers than needed.

Here is a table that puts all these figures side by side, from the country with the highest average annual salary to the lowest. The number of Python developers is all from a Linkedin study. 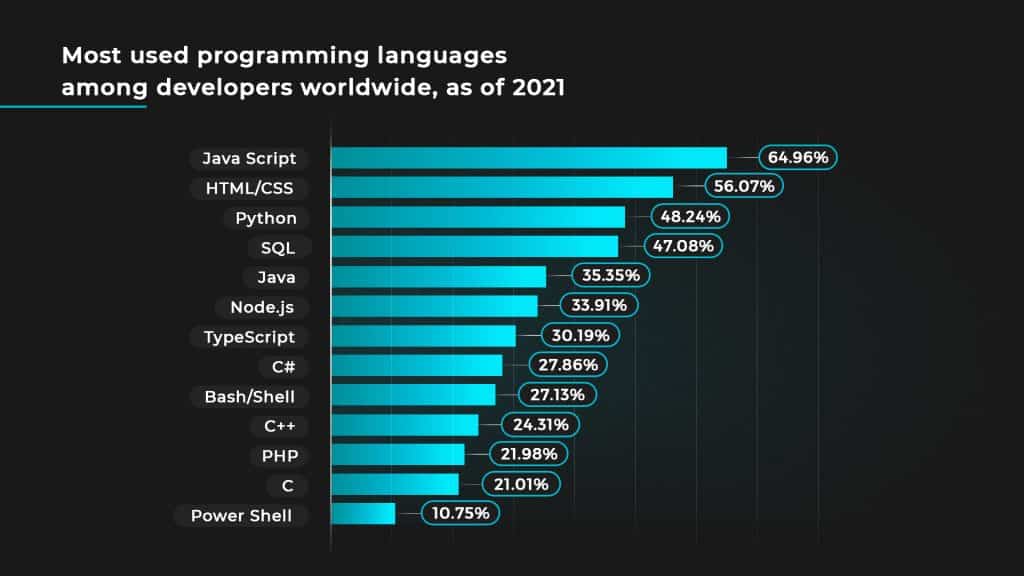 Why Hire In Ukraine

There are several reasons to seek the services of Python developers from Ukraine, including the fact that they offer highly skilled services without breaking the bank and keep your confidential jobs secure. Ukraine offers:

Now that you have an answer to how much do Python programmers make around the world, it’s time to make an informed decision and get your project started. As revealed above, hiring Python programmers in the US is the second most expensive compared to almost every other country in the world.

Outsourcing or outstaffing to Ukraine or other Eastern European countries can cover your talent shortage, significantly improve your productivity, and boost efficiency. At the same time, you are assured your product will be perfectly completed without compromising the quality.

Newxel can help you set up your software development team or even an R&D center in Ukraine. Get in touch with us for more information. You can also check our blog for more informative articles like the one on JS developers’ salaries, check it out.